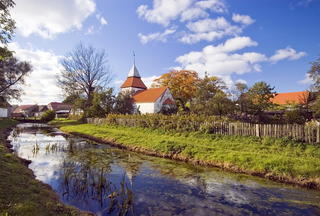 Once upon a time, peaceful villages like this one abounded in Poland. 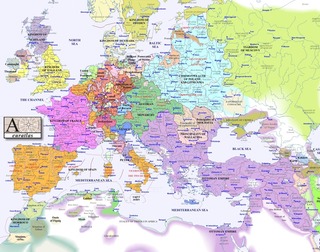 In the 1500s, the Polish-Lithuanian Commonwealth (the light-blue area in top right of map) was the largest in Europe. (Map: http://michelangelo.pixel-online.org/century8904.html?id_cent=6 )

This map shows Poland in 1918 when it became an independent country again.

This map shows Poland as it existed when I was a little girl.

This map shows the new borders of Poland after World War II. 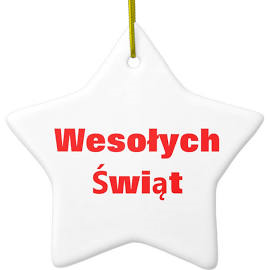 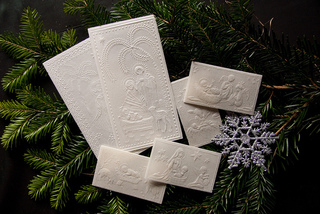 The oplatek is often served on a plate with twigs from the Chrismas tree, or hay, in memory of Jesus' birth in a manger. (Photo: http://polandisawesome.blogspot.com/2011_12_01_archive.html) 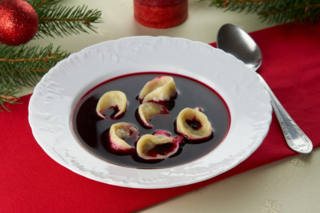 Many Poles enjoy their barszcz with mushroom-filled uszka (which translates as "little ears"). (Photo: http://sdpolishdeli.com/sdpolishdeli/index.php/traditions/polish-christmas) 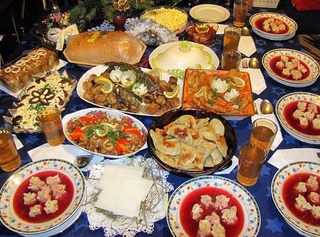 A Little Bit About Poland

The history of Poland is long and confusing. Officially founded as a European nation in 966, the country was once a great power in eastern Europe and also allied with the countries of western Europe through its Roman Catholic roots. In 1569 Poland joined with the neighboring country of Lithuania to create the largest state in Europe. But by the middle of the 1600s Poland was being regularly attacked by numerous countries in a series of wars that came to be known as the “Deluge.” The country never lost any of these wars, but each one took a greater toll on Poland’s wealth and power.

By the late 1700s the neighboring countries of Russia, Austria and Prussia (now Germany) began to divide Poland between them, leaving the territory of the country 30 percent smaller. Still, in 1791 Poland was the first country in Europe to have a written constitution. Throughout the 1800s Poland fought to hold onto its land, its citizens and its independence, but became a nation without a country. Poland’s borders continued to shift in the 1900s and, especially, after the Two World Wars.

Poland's Shifting Borders in the 1900s

At the beginning of the 20th century, Poland did not exist as a country. The land that had been Poland was divided between Russia, Prussia and Austria. My city of Lwὸw was part of the Austro-Hungarian Empire and was known as Limberg.

After Austria and Germany were defeated in World War I, Poland was finally able to become an independent country again. Lwὸw became a Polish city again, although the Austrian influence could be seen everywhere. I was lucky to be born during the period of Polish independence.

After World War II, the Germans and Russians took parts of Poland for themselves, leaving it a smaller country than it had been during my childhood. The eastern parts of Poland became part of the new Soviet Union. The new borders meant that now Lwὸw was located in the country of Ukraine, and renamed Lviv. Some of the northern and western parts of Poland that had been part of Germany were returned to Poland. These included major cities like Gdañsk (Danzig in German), Szczecin (Stetting in German) and Wroclaw (Breslau in German). With some small changes, the map of Poland today is very similar to what it was at the end of World War II.

What happened to Poland during World War II is as confusing as any other part of the country's history. My family's story reflects only one aspect of the Polish experience during World War II. Other Poles fought with the Allies throughout Europe and, of course, many Polish Jews were killed by the Nazis. Here is a timeline of the important developments during the years my story takes place.

• August 23, 1939 Soviets and Nazis sign the German-Soviet Nonagression Pact, promising not to attack each other. A secret part of the pact also divides Poland, granting control of the western half to Germany and the eastern half to Russia.
• September 1, 1939 Germany attacks Poland without warning, prompting England to declare war on Germany and marking the official start of World War II.
• September 17, 1939 Russia invades Poland, also without warning
• September 22, 1939 The Russian army occupies Lwὸw.
• September 30, 1939 The Polish government-in-exile (legal government of the Republic of Poland) is formed in France, then moves to London in June 1940.
• Winter/Spring 1940 Germans and Russians begin deporting Poles—both Jews and Catholics--to concentration camps and work farms.
• April 13, 1940 My family is just one of many deported in the dark of night by the Russians to Kazakhstan and other remote areas of the Soviet Union.
• May 1940 Soviet NKVD secretly kill many thousands of imprisoned Polish military officers in a forest near Katyn in Russia. (For many decades the Soviet Union claimed this massacre was done by the Nazis.)
• November 26, 1940 A ghetto is constructed to contain the Jewish population in Warsaw, Poland’s capital city.
• June 1941 Germany invades the Soviet Union.
• July 30, 1941 The Polish government-in-exile in London and the Soviet government agree to unite to fight against Germany. The Soviets free all Polish prisoners. A Polish army on Soviet territory is formed under the command of General Wladyslaw Anders.
• February 1945 At the war’s end, an agreement by the leaders of the United States, Great Britain and the Soviet Union (Franklin Roosevelt, Winston Churchill and Joseph Stalin) changes Poland's borders and allows it to have an independent government. However, the Soviet Union’s influence keeps Poland ruled by Communists until the collapse of the Soviet Union in 1991.

The last Christmas we celebrated with all its traditions in our home in Lwὸw was in 1938. By Christmas 1939, although we were still living in our home, the Russians had occupied Lwὸw and my father was in hiding. We did not have a tree and we had almost no money for the traditional foods and gifts--or any way to obtain them.

Christmas is a very important holiday in Poland, but it is celebrated very differently than in the United States. The most significant part of the holiday is Christmas Eve, not Christmas Day. Christmas Eve is called “Wigilia” (vee-gee-lya) in Polish, from the word meaning “vigil,” or to keep watch and wait. On Christmas Eve, Poles wait for the coming of Jesus Christ. Different regions of Poland celebrate in slightly different ways, but these are some of the important traditions in my part of Poland.

December 24th begins with the preparation of the twelve meatless dishes that will be served that evening. (Catholic tradition decrees that no meat be eaten on this day and even though a 1983 ruling dispensed with this, many Polish Catholics still follow it.)The food served during Wigilia includes several kinds of fish, prepared in a variety of ways, a hot beet soup called “barszcz,” (barshch) into which tiny mushroom-filled dumplings known as “uszka“ (ush-ka) (“little ears”) may be added, and larger dumplings, “pierogi,” with a variety of fillings: potatoes and cheese, sauerkraut, mushrooms. There are always several desserts, including dried fruit compotes, flourless cakes known as “tortes,” pastries and—in some regions of Poland--a dish known as “kutia,” (kut-ya) which is a blend of wheat grains, poppy seed, honey, raisins and nuts.

While the cooking and baking are going on in the kitchen, the Christmas tree, called “choinka,” (ho-yeen-ka) is being set up and decorated in the living room. Long ago, the adults did this secretly and the children did not see the tree until before the evening meal. The tradition was that an angel delivered the decorated tree. Today, children help decorate the tree, often wrapping candies in colored tissue paper and hanging them by threads on the tree. Fruit and cookies are also sometimes used as decorations, as well as traditional glass ornaments. In many households an angel is placed on the top of the tree; in others a star crowns the choinka. A nativity scene, known as “szopka,” (shop-ka) is placed under the tree.

While the tree is not set up and decorated until December 24th, it stays up throughout the twelve days of Christmas, which end on January 6th with the Feast of the Three Kings, or Epiphany.

When the first star is seen in the night sky, the Wigilia celebration begins. Before any food is served, the tradition of sharing the “oplatek” takes place. The oplatek is a thin wafer, similar to the wafer offered at Communion during Mass and other church services, but rectangular with Nativity scenes embossed upon it. In our family, the oplatek was smeared with honey and a second one placed on top, making—in effect—an oplatek/honey sandwich. The head of the household breaks off a piece and offers it to the oldest relative along with a personal wish for the coming year. The two share the piece; then the same ritual is enacted between all the others present at the meal, going from oldest to youngest.

After sharing the oplatek, the family sits down to dinner. There are no knives on the Wigilia table, in the spirit of peace, and there is always one extra place set. This place setting is for any stranger who might come by in need of a meal and a place to sleep. The tradition of the extra place is a reminder of Joseph and Mary being turned away from all the inns during their journey to Bethlehem.

With twelve courses, the meal is a long one. When it is finished, the family exchanges gifts and sings Christmas carols. The gifts are usually few and modest, because St. Nicholas Day, which is celebrated on December 6 in Poland, is the day when St. Nicholas brings children many gifts. The gifts under the choinka are said to have been brought by the angel—the same one that is credited with bringing the choinka. Wigilia often ends with a trip to church for Midnight Mass, which is known as "Pasterka," or the Shepherds' Mass.

After the festivities of Wigilia, Christmas Day is relatively quiet. Family and friends often visit and share a meal (now including meat). More Christmas carols are sung. Those who didn’t attend Midnight Mass attend church on Christmas Day.