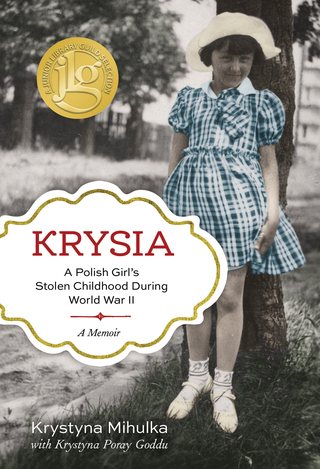 To Buy The Book

I encourage you to buy my book from your local independent bookseller. To find an independent bookstore,visit IndieBound. If you prefer to purchase the book online, I suggest ordering directly from the publisher,
Chicago Review Press, from
Barnes & Noble or from Amazon.

Krysia: A Polish Girl's Stolen Childhood During World War II tells the story of Krystyna Mihulka's childhood years as a Soviet political prisoner. While the horrors of the Holocaust are well known, few are aware of the tragic fate of the Polish victims of the Hitler-Stalin pact of August 1939, who were forcibly removed from their homes during World War II to pave the way for a Communist state in Poland. Krystyna Mihulka’s book presents this untold history through the eyes of a young girl struggling to survive and to understand the increasingly harsh world in which she finds herself.

Here's what reviewers are saying about the book

"Her narrative has undeniable value as a document...this memoir has power and does the necessary work of prompting readers to try to imagine what it’s like to be among the millions of children undergoing similar upheavals in the war zones of today."
--Booklist

"A young girl endures life as a political prisoner. In 1939, when Krystyna “Krysia” Mihulka was 9, Russia invaded Poland. Her straightforward first-person narration, crafted with the assistance of Goddu, is convincingly childlike though not without the occasional poetic flair. She recounts how her lawyer father went into hiding and Krysia, her mother, and her brother were arrested and forced to leave their beloved home in Lwòw, Poland (now Liviv, Ukraine), and made to take the long, difficult journey to a prison camp in Kazakhstan. As to be expected, life was harsh, but with her mother’s hope and determination to keep her children alive, they survived and left Kazakhstan in 1942, when Germany invaded Russia and amnesty was granted to Polish political prisoners like Krysia and her family. Her mother secured passage to Uzbekistan, where they reunited with family, following which Krysia, her mother, and brother sailed for Persia (modern-day Iran), where they lived in a Polish refugee camp in Tehran. Told in an easy narrative style, Krysia’s story is accessible; she is someone for whom readers will feel empathy while learning about the removal of more than 1.5 million Poles from their homeland. Additional material includes an afterword; an epilogue outlining Krysia’s life from her arrival in Persia to her eventual settling in California in 1969, where she lives today; a map of her journey from Poland to Persia; a Polish pronunciation guide; and an author’s note. Elegant, eye-opening, and memorable." --Kirkus Reviews

"In 1940, nine-year-old Mihulka and her mother and younger brother were forced from their home in Poland and taken to a Soviet-run labor camp in Kazakhstan. Through Mihulka’s mother’s resourcefulness and the children’s resilience, they survived the harsh conditions and were able to reconnect with family members before traveling to a refugee camp in Iran in 1942. Writing in a simple, direct style, Mihulka shares her experiences, fears, and reactions in a clear yet age-appropriate way. A guide to selected Polish words, along with their pronunciations, is placed at the beginning of this volume, giving tweens a chance to glance through it before diving into the narrative. Black-and-white photographs are scattered throughout, and a helpful map of the family’s journey is also included. An afterword and epilogue give insight into the fates of many Polish people during World War II, as well as additional information about Mihulka and her family. VERDICT: Painting a vivid picture of a child’s experience as a civilian caught among warring powers, Mihulka’s story offers many opportunities for discussion, especially given the current refugee crisis."--School Library Journal

"Offering thoughtful insight into a heartbreaking journey, Krysia explores the remembered experiences of the author, whose family was forced to leave Poland when she was just a child, deported as political prisoners in 1940 and held captive in Kazakhstan under Communist rule. More than a million people lost their homes and their freedom during this forced relocation, and many lost far more. Krysia’s story of her own losses, as well as the bravery and reliance of her mother, considers how war affects the very young, shaping their lives forever. This moving memoir provides an informative accounting of Krysia’s time in captivity and her eventual escape from Russia, told as recollections accessible to young readers. Describing the hardships and tragedy of one family, the text also focuses on a part of the world and the war that is perhaps overlooked. Readers familiar with other World War II narratives may be especially interested in learning more about the experiences of people living in Poland during the Soviet invasion, a perspective that garners less attention in books set during this part of history. The text is exceptionally educational, offering language help, maps, and photographs to fill in the details of Krysia’s harrowing tale. Still, despite the tragedy, Krysia’s story is also one of hope, making it a distinctively interesting and useful nonfiction text for young adult readers."--VOYA (Voice of Youth Advocates)

The Wall Street Journal runs a positive review of the book